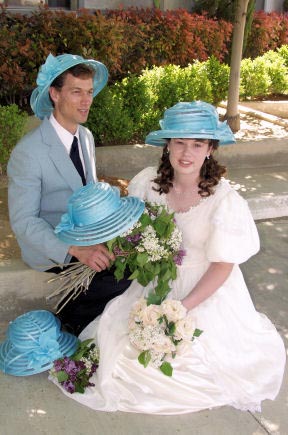 Tomorrow is my daughter’s fifth anniversary.  Five years ago,  my daughter got married.  I remember that time with much fondness.  You see, my wedding had a lot… a LOT of drama surrounding it.  My daughter’s– not so much.  I really tried hard to keep my opinions out of it.  There were a couple of things I was adamant about (things that had to do with safety and/or keeping guests fed and happy), but for the most part, it was “their day.”   As long as people were safe and fed, I was good.   Drama?  Not really.  I remember being busy but on the way to the wedding, I turned to Kevin and said, “I cannot believe that I’m not stressed!  Busy, sure, but I don’t feel stressed.”  He looked at me like I was nuts.  I think he was stressed!

So, what does that have to do with weddings, drama, and peace?  Well, I’ve noticed that a lot of weddings seem riddled with the drama (Ever hear the word, “Bridezilla?”)  Yeah.  I’ve met a few, but honestly, I have to say, I’ve met more “Momzillas” than “Bridezillas.”  Frankly, compared to Challice with her wedding, my two areas of “interference” were much more “Momzilla” than Challice ever was the bridal counterpart.

I wonder why that is?  Why do moms become so… intense… about weddings?  Honestly, if I didn’t have a holy horror of drama, I can definitely imagine myself losing all sense of reason and becoming an overbearing control freak.  It’s in my nature.  Alas, I hate drama more than I love control.  It saved all of our sanity, I am sure.

One good thing has come from all of this observation I’ve had over the past five to ten years.  I now have a pretty good idea of how to create a drama-filled wedding.  So, if a stress-free wedding is too tame for you, if you’re looking for something with more zip and pizazz, if you really want something that Bravo can turn into a new TV reality show… take note!

How to Have a Drama-Filled Wedding

Ok, so this is partly tongue-in-cheek.  I’m just brokenhearted to see so many people have to deal with such ugliness surrounding what should be one of the happiest times of their lives.  It’s sad to see the “kids” acting more mature than their parents and worse, the parents acting like they never got out of junior high.  You know, I always wondered if the wedding that I didn’t get to have (thanks to friends who overruled me on so many things) wouldn’t turn me into a crazed woman who insisted on doing everything the way I wanted it to have been and it wasn’t.  Thankfully, I don’t think I was that woman, but I’ve got six more daughters to go.  She could still emerge!  I pray that she doesn’t.

I think, or rather hope, that Challice doesn’t have terrible memories of their wedding day or even the days leading up to it.  I pray the same stays true of the rest of my children.  I pray that the Lord would remind all of us that people are more important than things or events, and that there is little that is so important as to raise a stink about it.

1 thought on “Of Weddings, Drama, and Peace”