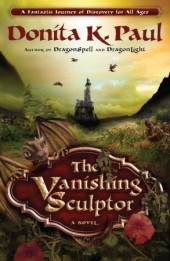 Publisher’s Synopsis: Donita K. Paul’s 250,000-plus-selling DragonKeeper Chronicles series has attracted a wide spectrum of dedicated fans–and they’re sure to fall in love with the new characters and adventures in her latest superbly-crafted novel for all ages. It’s a mind-boggling fantasy that inhabits the same world as the DragonKeeper Chronicles, but in a different country and an earlier time, where the people know little of Wulder and nothing of Paladin.

In The Vanishing Sculptor, readers will meet Tipper, a young emerlindian who’s responsible for the upkeep of her family’s estate during her sculptor father’s absence. Tipper soon discovers that her actions have unbalanced the whole foundation of her world, and she must act quickly to undo the calamitous threat. But how can she save her father and her world on her own? The task is too huge for one person, so she gathers the help of some unlikely companions–including the nearly five-foot tall parrot Beccaroon–and eventually witnesses the loving care and miraculous resources of Wulder. Through Tipper’s breathtaking story, readers will discover the beauty of knowing and serving God.

Author Bio: Donita K. Paul is a retired teacher and author of numerous novellas, short stories, and eight novels, including the best-selling DragonKeeper Chronicles, a series which has sold more than a quarter million books to date. The winner of multiple awards, she lives in Colorado Springs, Colorado, where she spends time mentoring and encouraging young writers. Visit her online at donitakpaul.com.

This book is unlike any book I’ve ever read.  Most of my fantasy reading has been in either the Arthurian realm or along the lines of C.S. Lewis or Harry Potter.  I’ve never read Tolkein, but from what I do know about him and his classic fantasy tales, I think this book fits closer in that sub-genre or perhaps something like Eragon.  I am always fascinated when someone can so thoroughly create another world– it’s definitely a gift.

It is very hard to review this book in any kind of depth.  Much of what I’d write wouldn’t make sense without being in context.  I mean, if you aren’t familiar with Ms. Paul’s emerlindians from her Dragon Keeper Chronicles, I don’t know that it’d make sense outside of the book.  I had a little trouble following parts at first until my vocabulary expanded to understand the tale that Ms. Paul wrote.  The first chapter (primarily the first few pages) were very, very difficult to wade through, and I’m not sure how many children would keep plodding along hoping for something interesting.  I know that I had to put it down and pick it up a few times myself.  However, once the story was fully in motion it was much more interesting and I wonder if that is because it is a companion story to a series.

For the most part, the book was well written, not sanctimonious in its ‘lessons’ (thank you, Lord), and somehow I did manage to lose myself in another world for a while.  That is what I consider good fantasy writing.  I just wish I could have lost myself a little sooner.

Personally, I think readers who are unfamiliar with this author should start with her best-selling DragonKeeper Chronicles.  Why miss out on background information and other exciting tales?  Besides, one book with dragons is never enough, right?

I found myself laughing at her humor.  There were several places where a very well-placed line just dropped a dry bomb of hilarity.  That is something I always appreciate.  However, one in particular left me gasping for air and I’ll leave you with this quote.  (Remember, I’m the one with the daughter to whom this so aptly applies).  “Only her mother could have said that.  Not even in her dreams could Tipper fabricate that line of reasoning.”   Substitute Andra for mother and you’ve got the story of our lives.

I can’t give the book five stars… I really wouldn’t even give it four but I would give one-half to two-thirds of it four stars.  And, it was good enough that I do plan to go purchase the DragonKeeper Chronicles.  I think my Jenna would like them.

Monday I’ll draw names from the commentors and send this copy out there!  Let’s see what others think!