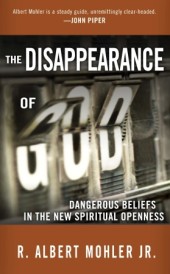 Title: The Disappearance of God:  Dangerous Beliefs in the New. Spiritual Openness

Publisher’s Synopsis: Great biblical truths are meant not only for our intellectual acceptance, but for our spiritual health.” –Dr. Al Mohler

More faulty information about God swirls around us today than ever before. No wonder so many followers of Christ are unsure of what they really believe in the face of the new spiritual openness attempting to alter unchanging truth.

For centuries the church has taught and guarded the core Christian beliefs that make up the essential foundations of the faith. But in our postmodern age, sloppy teaching and outright lies create rampant confusion, and many Christians are free-falling for “feel-good” theology.

We need to know the truth to save ourselves from errors that will derail our faith.

As biblical scholar, author, and president of The Southern Baptist Theological Seminary, Dr. Albert Mohler, writes, “The entire structure of Christian truth is now under attack.” With wit and wisdom he tackles the most important aspects of these modern issues:
Is God changing His mind about sin?
Why is hell off limits for many pastors?
What’s good or bad about the “dangerous” emergent movement?
Have Christians stopped seeing God as God?
Is the social justice movement misguided?
Could the role of beauty be critical to our theology?
Is liberal faith any less destructive than atheism?
Are churches pandering to their members to survive?

In the age-old battle to preserve the foundations of faith, it’s up to a new generation to confront and disarm the contemporary shams and fight for the truth. Dr. Mohler provides the scriptural answers to show you how.

I was so excited about this book when I received it in the mail.  The question on the back really spoke to some of my deepest concerns.  “Do you really know what spiritual lies you’re swallowing?” Do we?  One thing I learned in a class on Creationism vs. Evolutionism is that “fiction, repeated often enough, becomes fact in the public mind.”  I learned the phrase, had a nebulous idea of the veracity of it, but not until the past ten to fifteen years did I truly see how accurate a statement it is.

This book swiftly, succinctly, and intelligently wrestles the fallacies that are encroaching on the church today.  However, one thing this book isn’t, is dry.  I expected a pendantic treastise on hermeneutics rather than the very straightforward book it is.

Starting with the idea that the church needs “triage” in discerning which things need the quickest attention (the deity of Christ coming before women pastors, for example) he doesn’t dismiss anything as too irrelevant.   He just recognizes that if certain foundational teachings aren’t correctly understood, it doesn’t really matter what we believe about peripherals.  Who cares if people use wine or grape juice in communion if we no longer believe that Jesus actually died for our sins!

Mr. Mohler discusses difficult topic like sin and hell and their disappearance not only from American venacular, but also from the church as well!  What bothered me most about his discussion of these things wasn’t that they are disappearing from the church but that I hadn’t noticed how absent they are until I read the chapters discussing them.  I think the time I use the word “hell” the most, is when I hear someone say, “Oh, you deserve such and such.”  That is a pet peeve of mine.  As an acquaintence of mine once told me, “The only thing I deserve is hell.”    Now, everytime I hear someone say so and so deserves something, I remember her statement and praise the Lord that He has rescued me from what I truly deserve.  One quote that he mentioned was from the New Oxford Review and it stung.  “Could it be that the only result of attempts, however well-meaning, to air condition Hell, is to ensure that more and more people end up there?”  Ouch.

The topic of beauty struck such a deep chord in me.  I have a craving for beauty that is my constant reminder that I am made in  God’s image, so when I read the chapters on beauty, I found myself nodding and murmuring, “Amen.”  He reminds us that so much of what we call “beautiful” is merely pretty.  An example he used was that of an elderly woman gripped in the clutches of degenerative disease.  She turned to a young inexperienced pastor and asked, “Am I pretty?”  The pastor confessed to lying and saying, “yes.”  Mohler wisely reminded both the pastor and those of us reading the story, that while she wasn’t pretty, she was beautiful.  These are things I often find beautiful.  Heroism.  The sacrifice of one person for another.  Hard work.  Love.  These are beautiful things.

The Emergent Church was something I was eager to read about and he didn’t fail me.  While sticking to purity of doctrine, Mr. Mohler did a lovely job of showing the theological errors prevalent in this movement while still acknowledging the strengths.  Somehow, he managed to avoid being wishy-washy in his discussion and I found that delightfully refreshing.  One statement rings beautifully true.  “The emerging church and its leaders are right to insist that substance must be preferred to superficiality.  We can only pray and hope that they will remember and acknowledge that substance requires a substantial and honest embrace of truth.”  (emphasis mine)

Later in the book, he discusses open theism and I was appalled.  I’d never heard that term before and was disgusted to discover it basically proports that God is not omnicient.  Excuse me?  Most of what he’d mentioned, up to this point, was just a well articulated view of things I already knew and believed but I received a very thorough lesson in the current heresy known as “open theism.”  Lord preserve us from our arrogance!

When I read the chapter title, “The Demise of Church Discipline” my heart leapt into my throat.  Ouch.  I knew this one was going to hurt.  As he says in his opening line, “The decline of church discipline is perhaps the most visible failure of the contemporary church.” Ouch.  Amen, but ouch.  He asserts that the church is doomed to further moral relativism and he is right.  One thing he credits with our current dislike and rejection of church discipline is that we’ve lost our respect for shame.  Shame has been reduced to a “four letter” word and considered a hinderance to a “healthy self esteem”.  He addresses other difficult topics such as divorce and homosexuality in a context that is firmly rooted in Biblical truth.

I think the biggest eye-opener for me was his reminder that spiritually speaking, the Lord makes it clear.  Without discipline, we are considered illigitimate children, not sons.   The lack of church discipline is actually evidence of a lack of a true church rather than evidence of a “sensitive church.”  He reminds us of Paul’s admonition to the Corinthian church for tolerating immorality.  Paul raked them over the coals and demanded discipline!

I found it sad that it took four chapters to cover the dearth of church discipline in the church today.  If that grieves my sin-coated heart, what must it do to Jesus?  How does our Bridegroom feel when He sees His bride flirting with the world, or worse, in flagrant fornication with it?

There is so much more to this book than the little tidbits I’ve shared.  I just want to leave you with one last quote before you rush off to Multnomah’s website and buy the book….  (just a little not-s0-subtle hinting there)  “We are no longer seeing the first signs of cultural trouble, but rather indicators of advanced decay.”

You know, every time the church gets like this, God seems to raise up amazing men and women of God who, thanks to the Lord’s work in their lives, usher in a new revival.  I pray that this book is  the first pebble in that pond.  I pray that the ripples it causes have far reaching effects and in years to come, as I see the changes in the Lord’s body, I can pinpoint it to men like Mr. Mohler who dared to say, “This isn’t Biblical,” and showed us where we needed to return to purity of the gospel.

8 thoughts on “Book Review: The Disappearance of God”